The Nyakagezi gorilla family is the only fully habituated gorilla group in Mgahinga Gorilla National Park. Given that it is the only habituaed gorilla family, it offers visitors a great opportunity to track the rare mountain gorillas in the wild. The Nyakagezi family is composed of 9 members; 4 silver backs, 2 infants, 2Adults females 1 juvenile. The dominant silverback is Mark who took over leadership from his father Bugingo. The other members include Mathew and Mafia (silverbacks), Nyiramwiza and Nshuti (adult females), Nkanda (juvenile), Mutagamba and Rukundo (Infant). Bugingo the oldest silverback is believed to be more than 54 years. A rare but an interesting fact about the Nyakagezi group is that Bugingo still lives in the family yet in most cases, once the dormant silverback is overthrown, he is banished and dies in isolation or seeks refuge from other gorilla groups. For example in Mubare group, after Kanyonyi took over leadership from Ruhondeza, the latter left the group and lived a solitary life until he died. 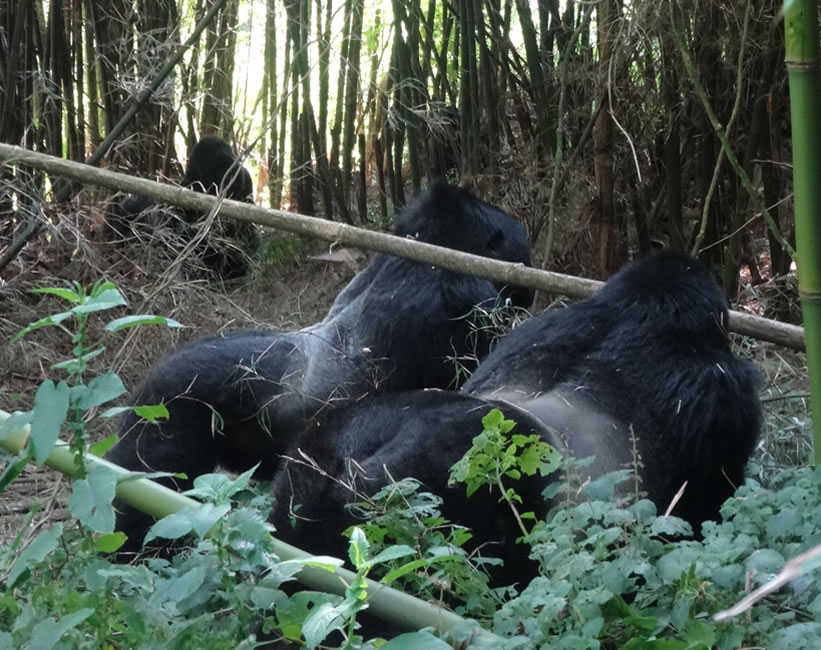 About the Nyakagezi Family

This gorilla group is found in South-Western Uganda, just in the renowned slopes of the three Virunga Volcanoes that includes the Muhabura, Sabyinyo and Gahinga. Nyakagezi is a place in Mgahinga Gorilla National Park where there is a lot of food attractive to the gorillas. Nyakagezi family is one of the easiest to track given the fact that it prefers a narrow home range for feeding, nesting, relaxing and recreation.

The group is popularly known for gorilla trekking in Mgahinga Gorilla National Park. It is composed of nine (9) mountain gorillas that are easily identified by their names. They include; Baby Rukundo, Nvuyekure, Nshuti, Mutagamba, Bugingo, Mark and Mathew. The Nyakagezi gorilla group was once led by Silverback “Bugingo” for some period of time but amazingly, Mark is said to have succeeded over throw his leadership.

Bugingo silverback is estimated to be 53 years and still thriving in the gorilla family some thing uncommonly seen in gorilla life. In normal occasions, any silverback gorilla that happens to be overthrown from the main group would resort to a lonely life or totally abandons the family like the case of Mubare gorilla group in the Buhoma North of Bwindi Impenetrable National Park.

The Nyakagezi gorilla group was famous for their migratory behavior across the Democratic Republic of Congo (DRC) and Rwanda. However, this gorilla group has today settled in Mgahinga Gorilla National Park in Uganda where tourists are assured of gorilla trekking experiences.

Though this group is mobile and crosses over to Rwanda and DRC, it is considered the easiest to track in Uganda because they are found in areas of lower altitude and prefer a small home range for nesting, relaxing and feeding (because of abundance of food). The Nyakagezi group is one of the most interesting gorilla groups worth tracking in Uganda because of it being the only gorilla group in Mgahinga, their mobile behavior and the fact that the silverbacks of the family (especially the oldest silverback “Bugingo” and the reigning silverback) live together happily.

Since 2012 the gorilla family has been settled within the Mgahinga National Park and the sucess rate to see these great apes stands at over 95% chances. Now it is easier to track this gorilla group because they have a permanent settlement unlike initially where they were always on the move. More and more tourists are now visiting the Park to track this interesting group. Due to their mobile and unpredictable behavior, gorilla permits for Nyakagezi group have to be booked at the Uganda Wildlife Authority Park headquarters in Ntebeko and it is always important to first confirm within 24 hours to ascertain whether they are within the Park or have crossed to other countries. Because it is the only group in the park, UWA sells only 8 gorilla permits for this Park per day.

Visiting the Nyakagezi gorilla group shouldn’t be an experience that centers on mountain gorillas but also an excitement that is built around the most incredible three Virunga volcano summits, the gorge and then the magnificent flora. Indeed you will appreciate taking gorilla safari to Uganda’s most gifted remote national park. However, there are only 8 (eight) gorilla permits that are always available for visitors to track the Nyakagezi gorilla group and this also be quantified to only 8 visitors per trek.

Besides tracking the Nyakagezi group, tourists can engage in Golden Monkey tracking because this is the only Park in Uganda where Silver meets Gold, the interesting Batwa trail (that takes you through the life of the “People of the Forest” who were hunter-gatherers), Birding and mountain hiking to Mt Sabyinyo, Mt Muhavura and Mgahinga.

If you are interested in tracking the mountain gorillas in this group, you can choose to travel on road or by air. Nyakagezi gorilla family is situated in Mgahinga Gorilla National Park and interested visitors can take scheduled flights from Entebbe International Airport or Kajjansi Airstrip and then land in Kisoro Airstrip where they can to be moved to the park on road from their respective lodge. By road: You can take the Kampala-Mbarara-Kabale-Kisoro route where you can easily connect to park where gorilla trekking is done.

The Lodges to stay:

In conclusion, the Nyakagezi gorilla group is the only habituated gorilla family that offers unforgettable and ultimate gorilla safari experiences to tourists who get into Mgahinga Gorilla National Park. Although the group used to roam around and past DRC and Rwanda borders, today you can track the mountain gorillas in the group which leaves them with authentic gorilla experiences of a life time.